Curcumin has already been used in Asian natural medicine for several thousand years. In the meantime there are more than 3,000 studies on the effect of curcumin. Curcumin Extrakt 45 has up to 40 times higher bioavailability than standard dosage forms of curcumin.

Why is the tumeric root more than just a spice?

Curcuma (Curcuma longa), also known as tumeric root, belongs to the ginger family and is native to India and Southeast Asia. Many people are sure to be familiar with tumeric from its use in the production of the spice curry and as a natural colorant. Beyond that, curcuma has been used in Indonesia (Ayurveda) and India for millenia. The most important ingredients contained are curcumin, other curcuminoids and tetrahydro-curcuminoids, which belong to the secondary plant compounds of phenols.

The bioavailability of curcumin is a problem

However, the benefits of curcumin could not been fully utilised because the human body can only absorb a small amount of natural curcumin. Or to put it in other words: the curcumin’s bioavailability through the intestine is very low. This is due to the fact that curcumin is fat-soluble and therefore it can only be poorly absorbed in the aqueous environment of the intestine. Thus, 90% of the curcumin is excreted again. This becomes particulary clear if you look at the intestines of a person who has previously consumed curcumin: it is dyed yellow- a sign that the curcumin does not reach the metabolism, or only to a small extent. Until now curcumin was mainly combined with piperine to improve its bioavailability. Although the blood concentration increases as a result, it only lasted one hour and then it quickly dropped to the original level. The sustainable absorption of curcumin therefore can not be achieved with piperine, which is irritating to the mucous membrane. 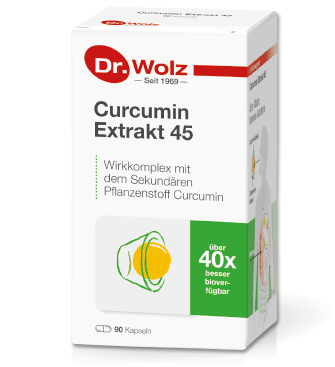 Vegan. Gluten-free and free from gelatine, lactose, piperine and polysorbates.

With Curcumin Extrakt 45 from Dr. Wolz we have succeeded in increasing the bioavailability of curcumin significantly. By providing the body with as much curcumin as possible its benefits can be fully utilised. The bioavailability of Dr. Wolz’ curcumin capsules is up to 40 times higher than that of pure curcumin powder or conventional preparations! How is that possible?
The fat-soluble (lipophilic) curcumin molecules are embedded in a ring of glucose molecules (a type of sugar, the so-called cyclodextrin) so that it results in a hydrophilic (water-loving) exterior and a lipophilic (fat-friendly) cavity inside. The curcumin molecule remains in this cavity until it reaches the intestine. There it is transported by the cyclodextrin molecules individually to the intestinal wall where it can be absorbed, while the cyclodextrin is broken down and excreted.

A varied, balanced diet and a healthy lifestyle are important for health.

For us, quality means the careful selection of raw materials, continuous residue analysis, certified manufacturing process and the verification of the effectiveness of our preparations by independent research institutions.